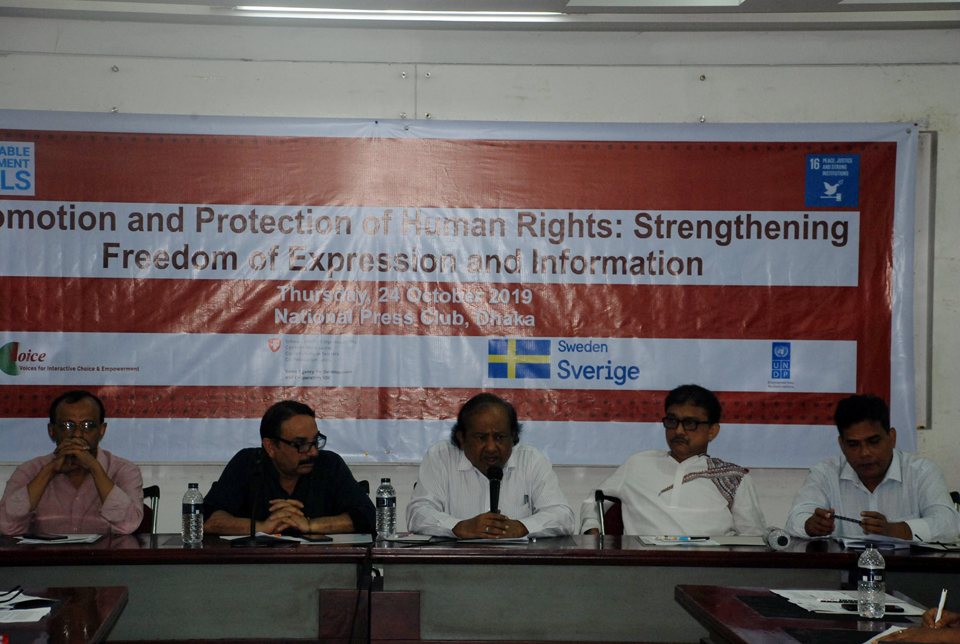 [Dhaka, 24 October 2019] Speakers urged to ensure the right to freedom expression and opinion in a dialogue held at the city’s press club today. Organized by VOICE, a rights organization with the support of UNDP Human Rights Programmes, the occasion was graced by Zafar Wazed, Director General of Press Institute of Bangladesh (PIB) as chief guest. Among others, Selim Akon of Article 19, Abu Sayeed, eminent filmmaker, Sirajuddahar Khan, a human rights activists, Sayeed Ahmed of Front Line Defenders, Saimum Reza Piash from the law department of Brac University spoke to the occasion titled `Protection and Promotion of Human Rights: Strengthening Freedom of Expression and Information’.

Ahmed Swapan Mahmud, executive director of VOICE moderated the dialogue. Speakers expressed their concern that government control over digital and online content and services like Facebook, YouTube, etc., might undermine democratic principles. A growing confusion over the provisions of the digital security act was also reflected in the discussion. They pointed out that a culture of fear makes carrying out their duties increasingly difficult. Speakers also discussed the roles and responsibilities of citizens in achieving the vision of a digital Bangladesh. There was a unanimous agreement that the number of unreported cases of online gender-based violence against women far outweigh the reported ones.

Zafar Wazed, DG-PIB said that free speech is guaranteed by Constitution Article 39, but users must behave responsibly so that others are not hurt. He also emphasized raising awareness on moral aspects while using the internet. Incitement to hatred is a punishable crime while he emphasized building strong institutions for avoiding fake news and disinformation. He also added that proper use of internet can be carry forward government visions on digital Bangladesh.

Sayed Ahmed said that right to access, receive and publish internet should be free from all kinds of control and surveillance. Restrictions of freedom of expression don’t help building inclusive democracy, he added. Syed Akon from Article 19 told that criminalizing freedom of expression is increasing alarmingly and there are incidents of abusing constitutional rights. Internet offers a key means by which citizens can obtain information, assert their rights, and participate in public debates concerning social, economic and cultural changes to improve their situation. He urged the government not to put restrictions on bloggers and face book users who provide alternative views, opinion, critical insights building democracy in the society.

Sirajuddahar Khan said freedom should not be restricted by any means while they emphasized to educate and build strong moral ground and respect to others in the society. Laws and media policy shouldn’t hamper democratic practices and governance processes in the country. Saimum Reza Piash criticizes the digital security act (DSA) for putting restrictions on media and common internet users. The law must be reframed so that it can be people friendly and users feel free to publish their opinion. Security should be replaced withy `freedom’ he added. He also expressed concern that a number of blogs and news sites are blocked that hampers right to express and opinion.

Noted film maker Abu Sayeed recommended that legal documents affecting online freedom of expression should be made as clear as possible in pedestrian language so that all citizens can abide by them without fear. The necessity of providing hands-on training to young people, in particular, girls on how they can stay safe in online mediums was brought up repeatedly by the participants while discussing in the dialogue. Referring to the Constitutional obligation and international human rights principles, Ahmed Swapan Mahmud emphasized the need to ensure right to freedom of expression both print electronic and online and pluralism in society. He also asserted that achieving sustainable development goals, particularly SDG 16.10 depends on “ensure public access to information and protect fundamental freedoms, in accordance with national legislation and international agreements.”