The findings shared in a dissemination program held today on 11th December 2021 at La Vinchi Hotel, Dhaka. The study titled ‘Explore tobacco companies’ interference on smoke free environment at restaurants in Dhaka city of Bangladesh’ is conducted by Voices for Interactive Choice and Empowerment (VOICE) a research and advocacy organization with the support of Campaign for Tobacco Free Kids (CTFK) in August-September 2021.The study was conducted to explore the ill tactics of tobacco companies to allure owners of restaurants in Dhaka city to established and maintain smoking zone at restaurants. According to Global Adult Tobacco Survey (GATS) 2017: 43.9% (38.4 m) non-smoker adults (15+) exposed to Secondhand smoke (SHS) at different public places including 49.7% exposed to SHS at restaurants and which is a serious public health threat. 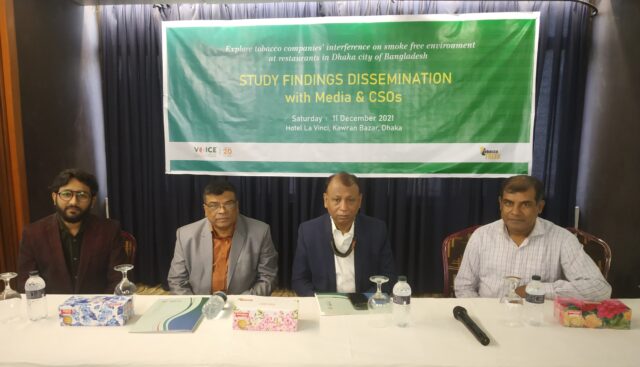 In the keynote presentation, Mr. Zayed Siddiki, project coordinator of VOICE told that the surveyed restaurants were selected from a pre list from high-end areas (Gulshan, Dhanmondi, Banani, Uttara) that has designated smoking area and tobacco advertising/branded materials displayed. All the restaurants were found with sign / logo of British American Tobacco Bangladesh (BATB) displayed in “colorful decorated box with lighting” (containing empty packets of cigarettes). In 73% of the restaurant’s advertisement is displayed at designated smoking area and 27% restaurants has advertisement at entrance/exit and near food service tables, also advertisements were displayed in multiple places. Tobacco companies offer one-time cash benefits to restaurant owners for displaying these advertising materials and maintaining it. Depending on the location of the restaurant, the average amount is 8 lakh Taka, maximum 15 lakh Taka and minimum 4 lakh Taka that include rent, electricity bill and other costs. The one-time cash incentive is either given through cheque or bank transfer. For displaying the advertisement 60% of the restaurants have done written agreement and 40% has oral agreement with Tobacco Company.

The study also found that restaurant authorities receive different types of gifts at different times from Tobacco Companies such as: Staff uniforms, lighters, ash trays, cooking utensils, coffee mugs, sample of new tobacco products, discounted purchase facility, plates/ glasses, covid protective materials etc. To ensure that the advertisements were displayed properly in the restaurants, the representatives of the tobacco company visit 40% of the restaurants every 7 days, 26.60% of the restaurants every 10 days and 33.30% of the restaurants every 15 days. The study recommended that, in order to protect non-smokers especially children and women from secondhand smoke (SHS) the government immediately needs to amend existing tobacco control law and ban the provision for designated smoking areas from all types of restaurants and also to take 100% smoke free policies in all other public places to ensure Prime Minister Sheikh Hasina’s vision for tobacco-free Bangladesh by 2040.

Honorable Member of Parliament, Ashim Kumar Ukil MP said smoking in public transport has been decreased which means awareness is increasing among people. In addition to this, the provision of keeping the designated place for smoking in the restaurant should be repealed in existing law. So that non-smokers, especially women and children could be protected from secondhand smoke.

Mr. Iqbal Masud, Director of Health Sector, Dhaka Ahsania Mission added, in order to reduce secondhand smoking we need to make hotel authorities more aware of violations of the law and enlist the help of the administration to make this as success.

Mostafizur Rahman, lead policy adviser of Campaign for Tobacco Free Kids (CTFK) added, the goal of building a tobacco-free Bangladesh by 2040 is being thwarted in various ways by the tobacco companies. Designated smoking areas in restaurants are one of the examples and he demanded the removal of DSA provisions in all public places in our existing law.

Syed Mahbubul Alam Tahin, Technical Advisor, The Union added, tobacco companies are putting young people at risk by providing designated smoking area in restaurants. We need to take swift action in this regard that tobacco companies alluring the restaurant owners to breach the law provisions and taking advantage of loopholes in existing TC law by pushing the authorities to amend the law and ensure the enforcement.