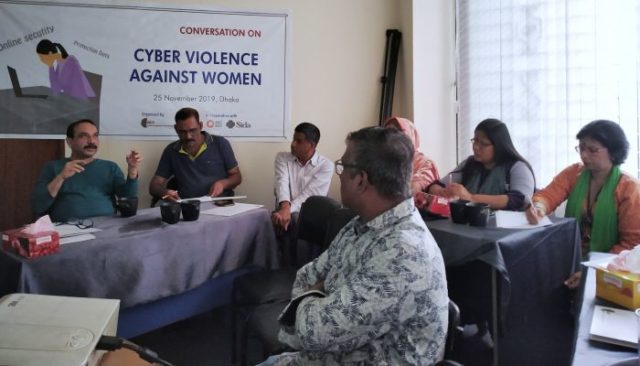 Speakers demanded to end cyber violence against girls and women in a discussion meeting titled `Cyber Violence against Women’ held on Monday at CIVIC Centre, in the city (Dhaka).

They said that cyber violence is a growing concern in recent times in Bangladesh. And woman folk is subjected to serious threats and becomes the victims of the violence in the digital platforms, mainly through facebook posting and text messages, and derogatory photos, videos.

They also raised concerns that cyber violence against women is still not treated seriously by the law enforcing agencies due to the lack of understanding suggesting that combating cyber violence against women needs huge attention by exercising existing policies and laws. And if needed, the government should formulate new policies and laws to ensure justice to the victims. In addition, all netizens should behave responsibly online and refrain from doing unwanted behavior. In this regard, a guideline can be formulated to train young people for their responsible behaviors in the virtual world.

Speakers further mentioned that cybercriminals must be punished within a short period of time to set examples and women must raise their voices against the cybercrime they face and demand exemplary punishment putting legal allegations, rather than to be silent.

The discussion meeting was organized by VOICE, a rights-based research organization in Dhaka while Ahmed Swapan Mahmud, executive director of VOICE moderated the event.

Abtab Khan Shawon, research and monitoring associate presented the keynote and said that false and nude pictures of women along with spam, elicit videos, rape threats, and indecent proposals have become the new forms of violence against women in social media.

He also mentioned that one in every three women is a victim of cyber violence. The World Health Organization considers violence against women “a global health problem of epidemic proportion”, ranging from domestic abuse to street harassment, sex trafficking, rape, and femicide. Social media has fuelled this pandemic.

According to the Cyber Crime Investigation Centre at the police Criminal Investigation Department (CID), different units of police work on cybercrime.