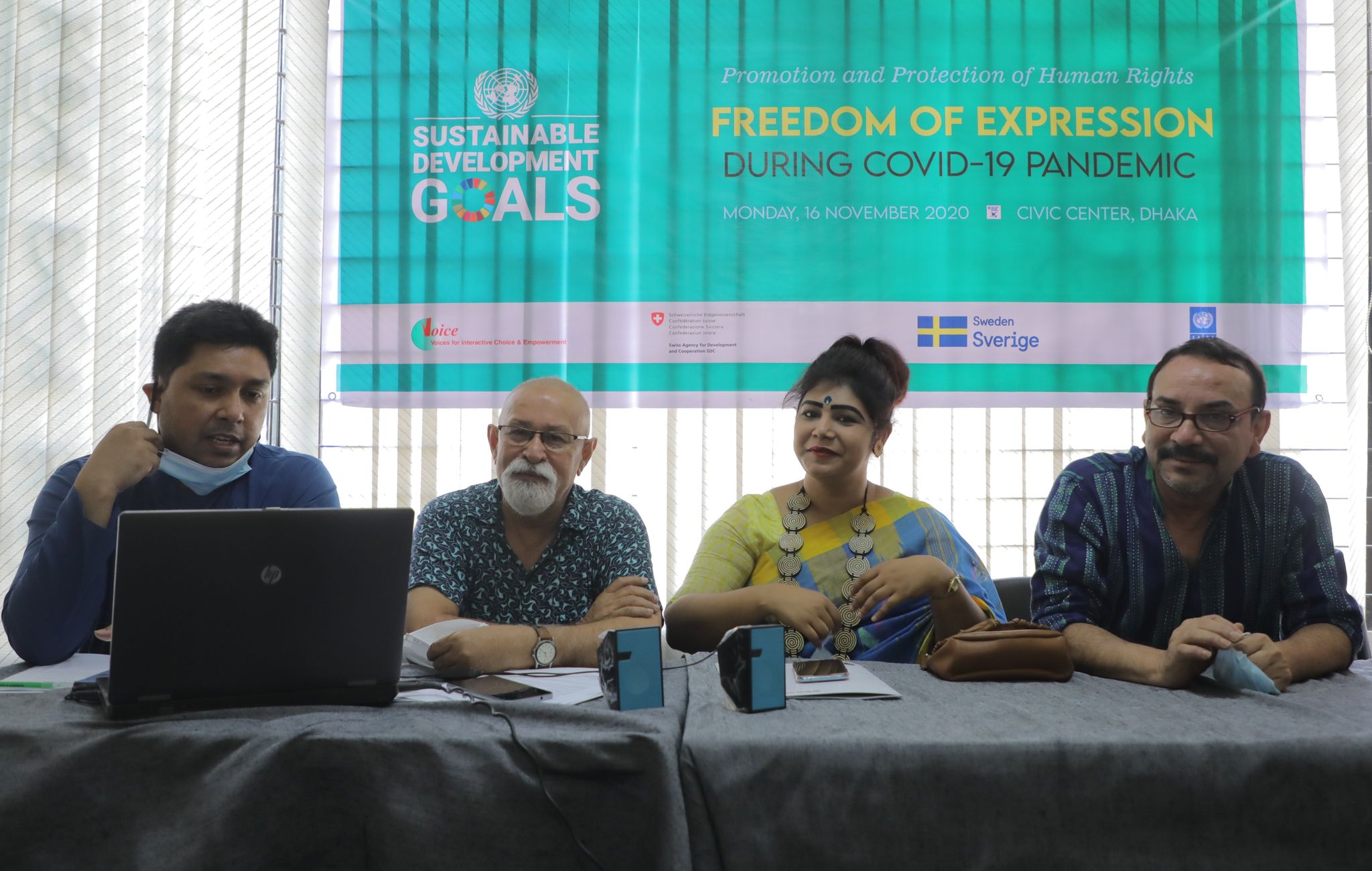 Ahmed Swapan Mahmud, executive director of VOICE moderated the dialogue. Speakers expressed their concern that government control over digital and online content and repressive use of Digital Security Act amid the COVID 19 pandemic. A growing confusion over the provisions of the digital security act was also reflected in the discussion. Speakers pointed out that a culture of fear making carrying out journalists’ duties and citizens’ voices increasingly difficult. Speakers also discussed the roles and responsibilities of citizens for a healthy cyberspace.

A key note presentation at the beginning of the dialogue by Zayed Siddiki, Filmmaker & Project coordinator of VOICE and Abtab Khan Shawon, program associate of VOICE stated that the Bangladesh government appears to be cracking down on free speech as COVID-19 hits the country, silencing those who express concern over the government’s handling of the epidemic. Persistent suppression of freedom of expression and censorship by the government has continued amid the pandemic. Journalists are being prosecuted under the Digital Security Act and arrested, harassed for reporting on government’s corruption. The Digital Security Act is being used as a tool to repress all dissents and criticisms.

The key note also stated that Bangladesh despite being a developing country, internet penetration is at 62 percent, with 103 million users. Facebook users are nearly 38 million. The country has a fair share of misinformation floating on social media. These contents mainly come from three groups, Islamist groups, Government critics and dissidents and Netizens. Although the country’s constitution promises to protect freedom of expression and freedom of press, unfortunately, the draconian law known as Digital Security Act allows for searches and arrests without warrant, with prison sentences that could go up to 14 years, plus a huge penalty just for “spreading” propaganda or tarnishing image of the state or senior officials. The law has been criticized for deliberately targeting journalists, critics, dissidents, netizens, artists, general public and even minors.

Last year (2019), there were over 1,000 arrests made under this law. Nearly 2000 cases have been filed under the DSA since its enactment on 8 October 2018, according to data from the Bangladeshi government’s Cyber Crime Tribunal. This includes more than 800 cases filed in the first nine months of 2020 alone, with many of the country’s most prominent editors and senior journalists being increasingly targeted.

Covid-19 has put a halt on almost everything but cases lodged under the Digital Security Act saw a manifold increase recently against people voicing any criticism, particularly people raising their voice against the corruption and mismanagement in the health sector and handling of COVID 19 situation in the country.  Moreover, some were even charged for communicating through social media. Analysts and human rights bodies have expressed their concerns over this sudden rise in case under the Digital Security Act and accused the government of using the law for silencing journalists and citizens to cover up its own failures even during this coronavirus crisis.

Salem Samad, Representative Reporters San Frontiers said that the government is increasingly using the deeply flawed Digital Security Act 2018 to harass charge and arrest journalists. There have also been restrictions on dissent by the public: medical professionals have been told not to talk to the media; social media is being monitored; and government employees have been told not to like, share or comment on social media posts that are critical of the Bangladeshi government. He also said, the use of DSA has been so outlandish that even folk singers, minors, doctors, and cartoonist, were not spared from being arrested. But mysteriously the law has not touched the Islamist groups – one of the key groups that have been spreading misinformation about Covid-19 and promoting hate speech.

Faruq Faisel, Regional Director, South Asia & Bangladesh Article 19 said that it is shocking that during the coronavirus pandemic the government is using the Digital Security Act to prevent journalists from doing their job. This act criminalizes freedom of expression and is characterized by vague definitions, broad provisions and sweeping powers.

Saimum Reza Pias, Senior Lecturer, Faculty of Law University of Dhaka said that Since the coronavirus pandemic hit Bangladesh, there has been a surge in arrests of journalists, activists and others who criticized the Bangladesh Government for its lack of preparedness and poor response to the pandemic. Dr. Aireen Zaman, President Bangladesh Chapter, PEN International said that Bangladesh now ranks 151st among 180 countries, with the lowest score for press freedom among all South Asian countries, according to Reporters without Borders (RSF). In the two years since the Digital Security Act was passed, Bangladesh has dropped five places.

Jamal Uddin, Reporter of Daily Ittefaq also speaks about freedom of expression. He said that the government should work with domestic and international experts to draft a new law that fully upholds the principles of free speech and internet freedom. Aparajita Sangeeta, Activist & Independent Filmmaker said that Bangladesh is falling behind international standards when it comes to freedom of expression and artistic freedom.

The discussion also highlighted the whole pictures of the harassment of journalists and citizens during pandemic and urgent need to amend the digital Security Act 2018 and make sure it is in line with international human rights law and standards.