VOICE urges to include women in decision making process 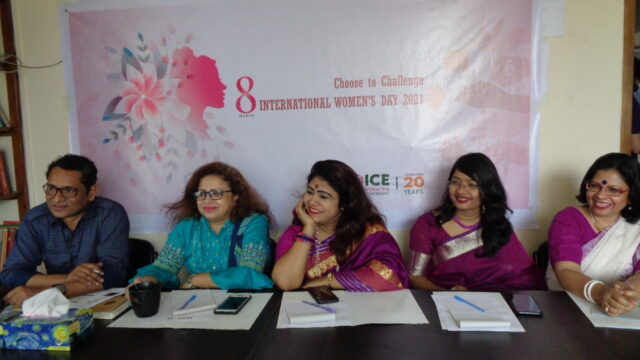 In the last few decades women’s participation in formal, informal sector, small and medium size enterprise, and entrepreneurship have drastically increased. Yet they often get excluded from decision making process.

UN Women have set women in leadership to achieve an equal future in a COVID-19 world as the theme of International Women’s Day which is directly related to women’s participation in decision making, said a press release.

“If women cannot take part in decision making how will they come in leadership and build a better world” asked VOICE, a human rights organization, at a seminar in its Civic Centre in the city on Monday.

The seminar was moderated by the executive director of VOICE, Ahmed Swapan Mahmud and key note presentation was delivered by Sadia Rahman, the media manager of VOICE.

The presentation addressed the loopholes in policy and urged inclusion of women in decision making process.

It explained how among 60 million people in workforce, 18.6 million are women. It also presented the stark contrast between men and women’s participation in formal sector. In case of women only 8.2 per cent are in formal sector whereas men’s involvement is 17.9 per cent.

Government from different period took notable initiatives to include women in important sectors. Government has taken up “National Women Development Policy 2011”. There is reserved seat for women in parliament and in public transportation. Also, there are incentives for girl children in educational institutes to reduce child marriage, speakers mentioned.

Despite having the initiatives, the index of gender-based violence is high. Women get harassed in workplaces, public places and in transportations. All these events collectively reduce women’s participation in decision making, said Aparajita Sangeeta.

Student Activist Marwa Kazi said, though there are initiatives, very few women in root levels know about her rights.

“To change this scenario, women must start asking question in right places and be aware and vocal about their rights” said Musfika Laiju, a feminist activist. She thinks women’s movement lacks strong leadership and doesn’t know right avenues to ask questions.

A special screening of a short film “Chharpatra” directed and produced by Aparajita Sangeeta took place during the seminar while she was sharing her thoughts on women empowerment and urging for policy implementation strongly.

Development activist Ayesha Siddika Asha said that determination and collective activism can change the scenario of women status in the country.

Editor of magazine Purbapor concluded the seminar with a hope that men and women will work together to change the existing inequality and include women in decision making in future.