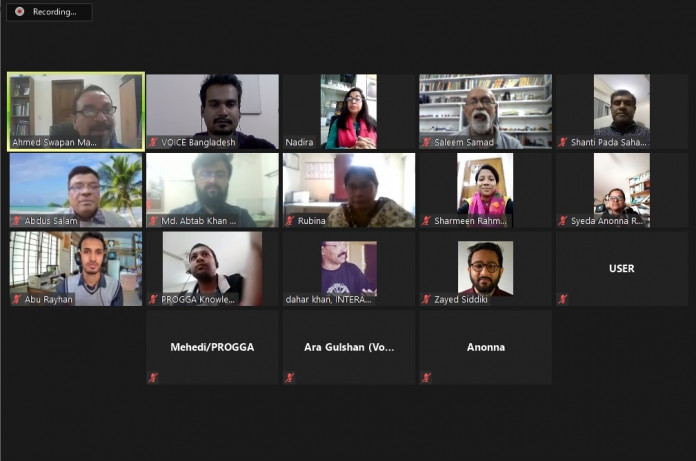 Speakers at a webinar urged the government to take immediate measures against tobacco advertisement shown in e-commerce website buyherenow.com.bd. They also called for banning Corporate Social Responsibility (CSR) programmes of the tobacco companies.

The webinar was organised by the research and rights-based organisation VOICE on Thursday. Also the event was held in-person at the Civic Centre in the capital which was moderated by Ahmed Swapan Mahmud, Executive Director of VOICE.

In the keynote presentation, speakers mentioned a pop-up advertisement of Bension and Hedges (B&H) was shown in an e-commerce website of  buyherenow.com.bd. though Smoking and Tobacco Products Usage (Control) (Amendment) Act, 2013 (Act No. 16 of 2013) prohibits producing or disseminating an advertisement of tobacco products through any means including electronic media and websites. Also, the website buyherenow consists of Benson and Hedges’ brand colour, which suggests that the has a direct involvement with BATB.

Sharker Shams Bin Sharif, Communications Officer, Campaign for Tobacco Free Kids said, “BATB’s advertisements shown in the e-commerce website is a gross violation of the existing law. The tobacco companies by no way can promote or advertise their products through any platform. Also, there should be a ban on their CSR activity as well as making the amendment in the tobacco control law. If they are eager to help the people of the country they can donate in government’s fund.”

The event was attended, among others, by the representatives of CSOs, NGOs, journalists and the anti-tobacco activists.