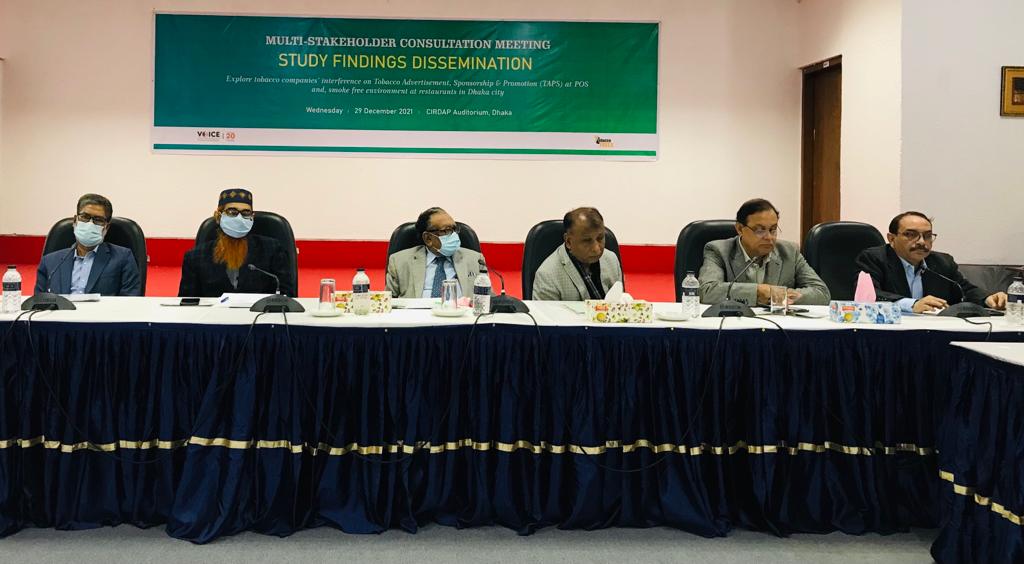 Tobacco companies are resorting to ill tactics to display and promote their products, taking advantage of loopholes in the Smoking and Usage of Tobacco Products (Control) Act, says a recent study.

Findings of the study, conducted by Voices for Interactive Choice and Empowerment (VOICE), a research and advocacy organisation, were revealed on 29 December during an event held at the capital’s Centre on Integrated Rural Development for Asia and the Pacific (Cirdap).

VOICE found in their study that the tobacco companies are enticing and inducing restaurant owners to establish designated smoking areas and display advertisements for tobacco products.

“If the tobacco companies violate the law for profiteering, then the law should be amended with strict provisions to specifically ban product display and advertisement at point of sale,” said former health minister and chairman for the parliamentary standing committee of science and technology, Prof Dr AFM Ruhal Haque, the chief guest of the event.

According to the findings of the study, tobacco companies are encouraging tobacco sales by leveraging various marketing and advertising tactics. They offer “Best Seller” awards each year for top performers. Both British American Tobacco and Japan Tobacco International offer incentives— such as celebratory dinners and free trips at home and abroad for dealers, wholesalers, and vendors.

Another study that surveyed restaurants selected from a pre-list from high-end areas (Gulshan, Dhanmondi, Banani and Uttara) with designated smoking areas found that tobacco advertisement materials were displayed in their premises, read a press statement.

The studies recommended that to ensure Prime Minister Sheikh Hasina’s vision for tobacco-free Bangladesh by 2040, the existing Tobacco Control Act should be strengthened by amending the provisions to include a comprehensive ban on product display at POS. It further recommended the removal of provisions for designated smoking areas from all types of restaurants and other public places to protect public health, especially youth, children and women.

Manjurul Ahsan Bulbul, CEO of TV Today presided over the event, which was moderated by Ahmed Swapan Mahmud, executive director of VOICE.