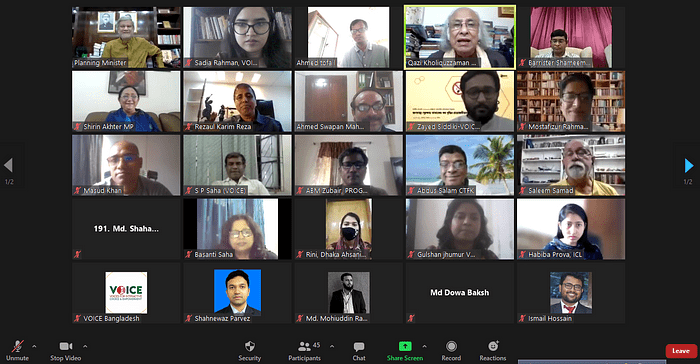 The government needs to increase price of tobacco products by imposing tax in the upcoming national budget to contain its use, said speakers at an online discussion yesterday.

Besides, rigorous awareness campaign on the danger of tobacco use and banning its cultivation and production are required to control its use among the country’s adult population, they said.

Voices for Interactive Choice and Empowerment (Voice) with support from Campaign for Tobacco-Free Kids (CTFK) organised the discussion on “Necessity of Increasing Tax on Tobacco for Public Health Safety”.

He said the prime minister has pledged to turn the country tobacco-free by 2040 and the government has been working to achieve the goal.

He said there is a need for increasing awareness campaign against tobacco use so that young population avoid consuming tobacco products.

At present, 35.3 percent of the country’s adult population is abusers of tobacco products, said Zayed Siddiki, project coordinator of Voice, while presenting a concept paper.

He said about Tk 22,000 crore is collected as fiscal-yearly revenue from tobacco sector whereas people spend over Tk 30,000 crore for treatment of tobacco-related ailments annually.

In the country, about 1.61 lakh people die each year due to tobacco-related ailments, he added.

ABM Zubair, executive director of Knowledge for Progress (Progga), said it is possible to reduce use of tobacco products by imposing high tax.

Lawmaker Shirin Akhter of Feni-1 said there should not be any excuse while imposing high tax on tobacco products.

Moderating the event, Ahmed Swapan Mahmud, executive director of Voice, said campaigns and discussions regarding stopping tobacco use should continue.

Lawmaker Shameem Haider Patwary of Gaibandha-1, journalists Saleem Samad and Nadira Kiron, and Mostafizur Rahman, lead policy adviser to CTFK, among others, spoke at the discussion.