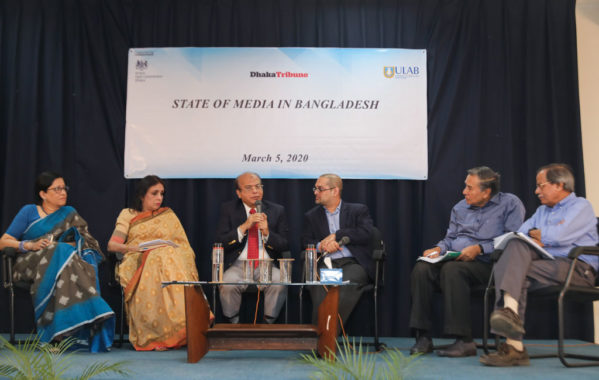 Social media is also a significant source for information

A large number of news followers in Bangladesh rely on social media to get information, but private newspapers still remain the most trusted news source for the majority of news readers in the country, a new research has revealed.

The findings of the study titled the Libertas Project, jointly conducted by the Center for Enterprise and Society (CES) of the University of Liberal Arts Bangladesh (ULAB) and Dhaka Tribune, was unveiled at a seminar held at ULAB auditorium in Dhanmondi, Dhaka on Thursday.

The study surveyed 500 randomly selected people from all sections of society, where 63% of the respondents said they still rely on privately-owned newspapers as the trusted news source, while 41% said they consider social media as their most trusted source of news.

The research was funded by the British High Commission in Dhaka.

Addressing the seminar, Prime Minister’s Media Adviser Iqbal Sobhan Chowdhury, who was the chief guest at the event, said free media is essential for economic development and democratic transition.

“When we talk about the state of media, we must also look into the state of economy, politics and social order in a country,” he said. “If a society is advanced with its idea, if a society is not dependent on others… then the media also enjoys more freedom.

“When our country is economically achieving remarkable development… and we see some stability in the political sector… the social sector is also improving. So we are now at a crossroads, where the media can play an important role, to ensure human rights, to ensure the right of free expression, and to ensure good governance, and to ensure social harmony.”

He said the media now must play its role as the state and the people expect it to.

Javed Patel, acting British high commissioner to Bangladesh, said people in every country should be able to discuss, debate freely and challenge their government.

Dr Kazi Anis Ahmed, vice president of the ULAB Board of Trustees and publisher of Dhaka Tribune, said news media is under threat due to the expansion of social media, as social media platforms are allowed to get away when using contents for free, while the primary generators of the content are news media.

He said laws need to be changed to protect the rights of the journalists, but the people in power do not seem to make those changes.

“I do not know how to get past that paradox. One way you get past this paradox is when the society itself values those values enough,” he said, adding his personal concern was that the society is complicit in the culture of intolerance.

A panel discussion was held at the seminar, moderated by Dhaka Tribune Editor Zafar Sobhan, where panellists shed light on the impact of social media on news media, disinformation, media ownership and readership.

Speaking at the discussion, Zafar Sobhan said journalists who are working outside the city are working in an environment that is far more risky compared to the city areas, because they deal with political and business influences.

Ayesha Kabir said the rat race of breaking the news has done more harm than good to the news industry, as media outlets often publish news without proper verification to break the news before their competitors.

“Why do we practice self-censorship? Because we fear the consequences of expressing ourselves,” said Mahfuz Anam. “Freedom is not just a set of rules. It is an environment.”

He also said the media these days has every right to praise but not to dissent.

Iqbal Sobhan Chowdhury said newspapers should be an organization with mission and vision, not a commercial outlet.

Prof Manzoorul Islam said alongside journalists, readers should be trained as well.

While presenting the findings of the research, Ahsan Senan, project coordinator of the Libertas Project, recommended the media outlets to address the widespread concerns about their ownership structures, provide better pay-structure to journalists and support journalists in the face of threats and persecution.